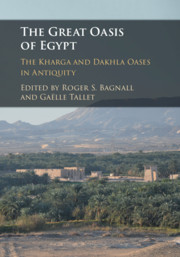 The Great Oasis of Egypt provides the first full study of the Dakhla and Kharga Oases in antiquity, written by participants in several of the current archaeological projects in this region. The oases were closely tied to Egypt and to each other, but not always easy to control, and their agricultural productivity varied with climatic conditions. The book discusses the oases’ geology, water resources, history, administration, economy, trade connections, taxation, urbanism, religion, burial practices, literary culture, and art. New evidence for human health and illness from the cemeteries is presented along with a synthesis on the use of different types of cloth in burial. A particular emphasis is placed on pottery, with its ability to tell us both about how people lived and how far imports and exports can be seen from the shapes and fabrics, and both literature and art suggest full participation in the culture of Greco-Roman Egypt.